We trudged down a long, rugged road to conceive our son, and while future children were always in our hearts and hopes, we had anticipated a similarly turbulent course to further expanding our fam.  That disheartening path of our family-building past has undoubtedly shaped my parenting ethic and has emboldened my aspiration to be an attached, gentle mama. One specific element of my personal parenting ethic–breastfeeding–grew to become a profound and potent combination of attachment and empowerment.  Becoming a mama was such a long-held dream, and breastfeeding had become so meaningful; I made these things–dwelling in my blissfully realized motherhood and nurturing my nursing relationship with my son–my priorities.

When discussions about adding to our brood would crop up between me and my husband, these conversations were always left open-ended. I wondered about child spacing. Worried that we’d get lost on that too-familiar, dark and long path again, I wondered if it’d be prudent to wean my son altogether in order to get a jump-start on trying for another baby. In the end, I found peace in focusing my energy and attention on the relationship with the child I was already so fortunate to have. (Zero judgement towards anyone who has decided differently. That is some seriously heart-wringing stuff, and I have the utmost respect for people who have to contend with making that decision.)

Life, as it tends to do so masterfully sometimes, demonstrated disregard for our difficult decision to table growing our family. My period returned on its own at 14 months postpartum, and after three postpartum cycles, I discovered I was pregnant. It was a surprise that spun my head and world around, one that filled me with a jaw-dropping, Niagra-sized waterfall of disbelief, awe and question. 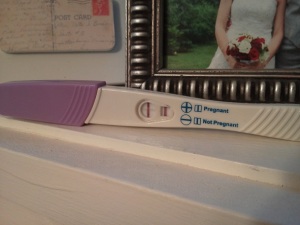 I was saturated in competing emotions: joy and trepidation; peace and anxiety; gratitude and ambivalence. I suppose these confusing feelings are par for the course when life grants a hope you long ago released. As I now trek into the 17th week of this pregnancy, that deluge of conflicting emotions has evaporated, leaving only faint water marks in its wake–now nearly invisible reminders of how stunned we were by this deeply wanted, yet entirely unexpected bit of fruit in my ute.

In so many ways–from conception to morning sickness to support system–this  pregnancy has been strikingly different from my last. Though I’ve experienced pregnancy and childbirth before, I feel like I’m learning entirely new lessons this time. It’s exciting. And humbling.

If you’ll join me, I hope to take you along for this journey. This pregnancy has already thrust us into big changes–my toddler is now fully night-weaned (I will share that story soon). I’m currently navigating the decision about where to birth this bundle of bebe, preparing emotionally and physically for a new bambino, and hoping to learn what attached, natural, gentle parenting looks like when you’ve got two to snuggle and wrangle. I hope that we can trade insights…

How about you? Did a struggle to conceive/sustain a pregnancy influence your parenting ethic? Have you ever debated altering your attachment tools in order to grow your family? Ever had your world rocked by a pregnancy–first, second or otherwise? How did you manage these experiences?

Rhianna blogs from her adopted hometown of St. Louis. She gives thanks to the Goddess of Elastic-banded Pants for her roundly unattractive, but so, so comfortable apparel.  Now if only the Goddess of Morning Sickness would heed her pukey pleas…

22 thoughts on “The Hoped For, Yet Unexpected Second Baby”